The social media frenzy found its way into the Hyatt Regency Chicago this Tuesday, with over 200 Twitterers chatting away in real space. The event marked the second stop on the Mashable-sponsored, six-city #Hyatt4Good Tweetup Tour. Created as a series of informal meet and greets, the Tour is attracting more and more “followers” as it leaps from New York to Chicago, and now on to Denver, L.A., D.C., and Boston.

Contrary to initial suspicions, comments are carrying on in excess of 140 characters. In Chicago, the social media community was well represented by a consortium of tech and media mavericks, designers, entrepreneurs, PR and marketing professionals, and others invested in ideas surrounding social media. Attendees gathered in groups of twos and threes, their excitable banter fittingly matching the exuberance so often found on social networks like Twitter and Facebook. Conversations ranged from social media news to business development, to the latest in smartphone applications. What remained consistent, however, was the level of deep interaction so common among Twitterers. After all, it is just this type of open participation that continuously injects the “social” into social media. Several guests showed up with no prior knowledge of the tour, encouraged by friends unable to attend—yet eager to invite others to get out and mingle. 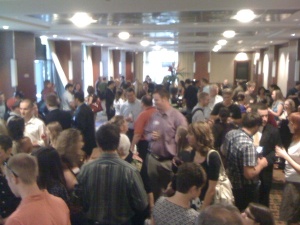 The event also celebrated the launch of Sevans Strategy, a Chicago-based PR and new media consultancy. Sarah Evans, the company’s president, presented a short video highlighting the profound changes occurring in the world of social media. To conclude the evening, some raffle prizes were announced, followed by Mashable COO, Adam Hirsch, inviting everyone to toast their nearest neighbor—a social media gesture of open exchange if there ever was one.

It’s fair to say the social media movement has entered its adolescence, with events like the Twitterup Tour attracting hundreds into small ballrooms across the country. Next year, it may be thousands. Yet unlike adolescent periods marked by an awkward and self-imposed identity crisis, the social media movement today holds its head high, confident in its own self-awareness, more “social” now than ever before.